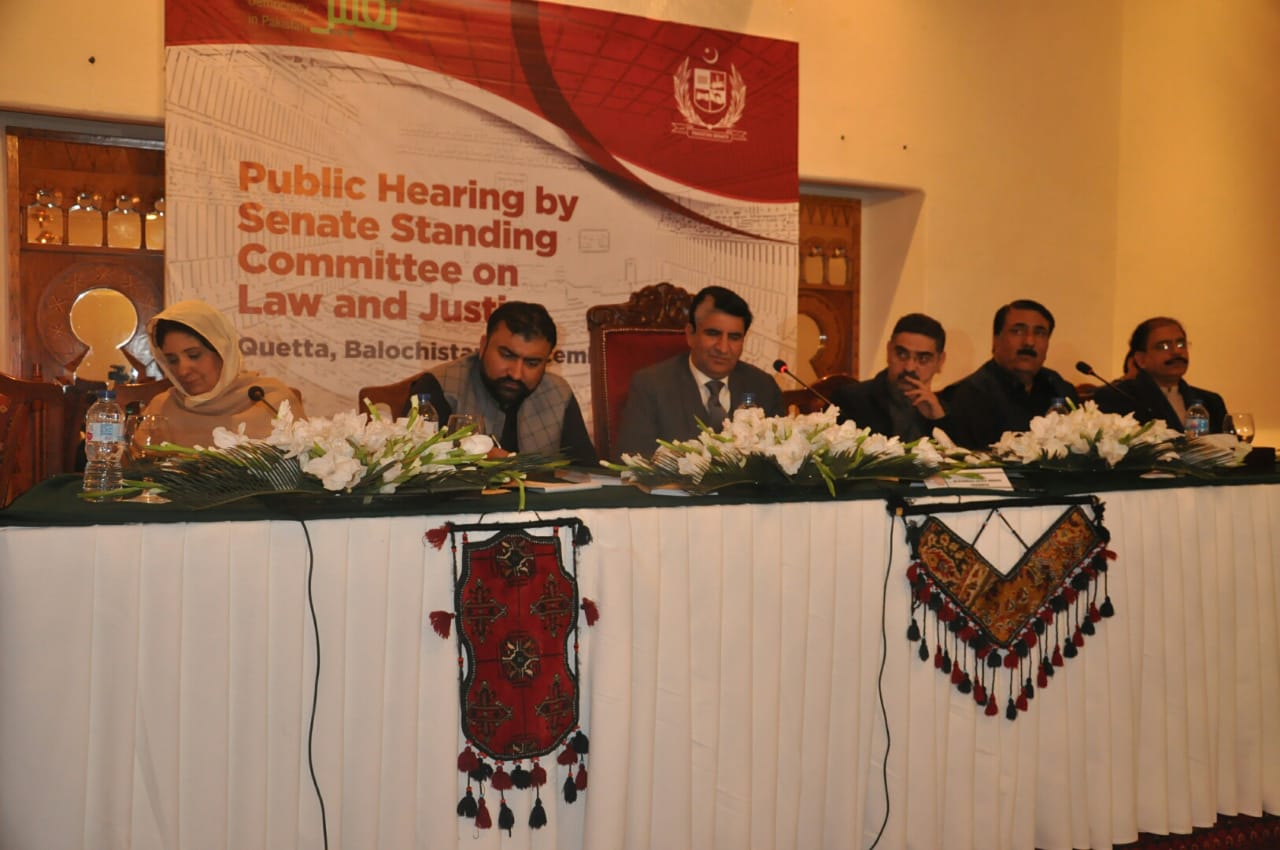 Senate Standing Committee on Law and Justice held a Public Hearing on Thursday at Serena Hotel, Quetta to discuss three (03) Bills with proposed amendments in the Constitution of the Islamic Republic of Pakistan including amendments in Articles 1, 51, 59, 106, 175, 198 and 218 to provide for creation of new South Punjab province, in Articles 51 and 106 on increase of seats from Balochistan in the National Assembly and Provincial Assembly and in Article 11 to increase the age of child employment from 14 to 16 years.

Chairman of the Committee, Senator Muhammad Javed Abbasi in his opening remarks stated that the main object of this exercise is to give the general public an opportunity to share their views and inputs on the proposed Constitutional amendments. Senator Javed Abbasi also stated that it was a conscious decision by the Committee to take viewpoints, from public at large but also from the Members of each Provincial assembly, by holding Public Hearing in each provincial capital.

A large number of participants including Parliamentarians and representatives of Bar-councils, civil society, academia, students, journalists and general public attended the public hearing. Participants were given the opportunity to speak and to give their opinions and suggestions on the proposed Constitutional amendment. The committee expressed their gratitude to the members of the general public for their participation and contribution at the Public hearing.

Earlier today, the Senate Standing Committee on Law and Justice, led by Chairman of the Committee, Senator Javed Abbasi, held a meeting with Sardar Babar Khan Musakhel, Deputy Speaker of the Provincial Assembly of the Balochistan and with the Members of the Balochistan Assembly. Members form all the political parties in the provisional assembly were present during the meeting and shared their views and opinions in detail on all the proposed amendments. The Members stressed the need for increase of seats from Balochistan in the National Assembly and Provincial Assembly as it shall help to give due representation to the people from Balochistan.

Public Hearing was held under the chairmanship of Senator Muhammad Javed Abbasi at Serena Hotel, Quetta and was attended by Members of the Committee including Dr. Ghous Muhammad Khan Niazi and Senator Sana Jamali. Senator Anwar ul Haq Kakar, Sarfaraz Ahmed Bugti and Naseebullah Bazai were also present at this occasion.