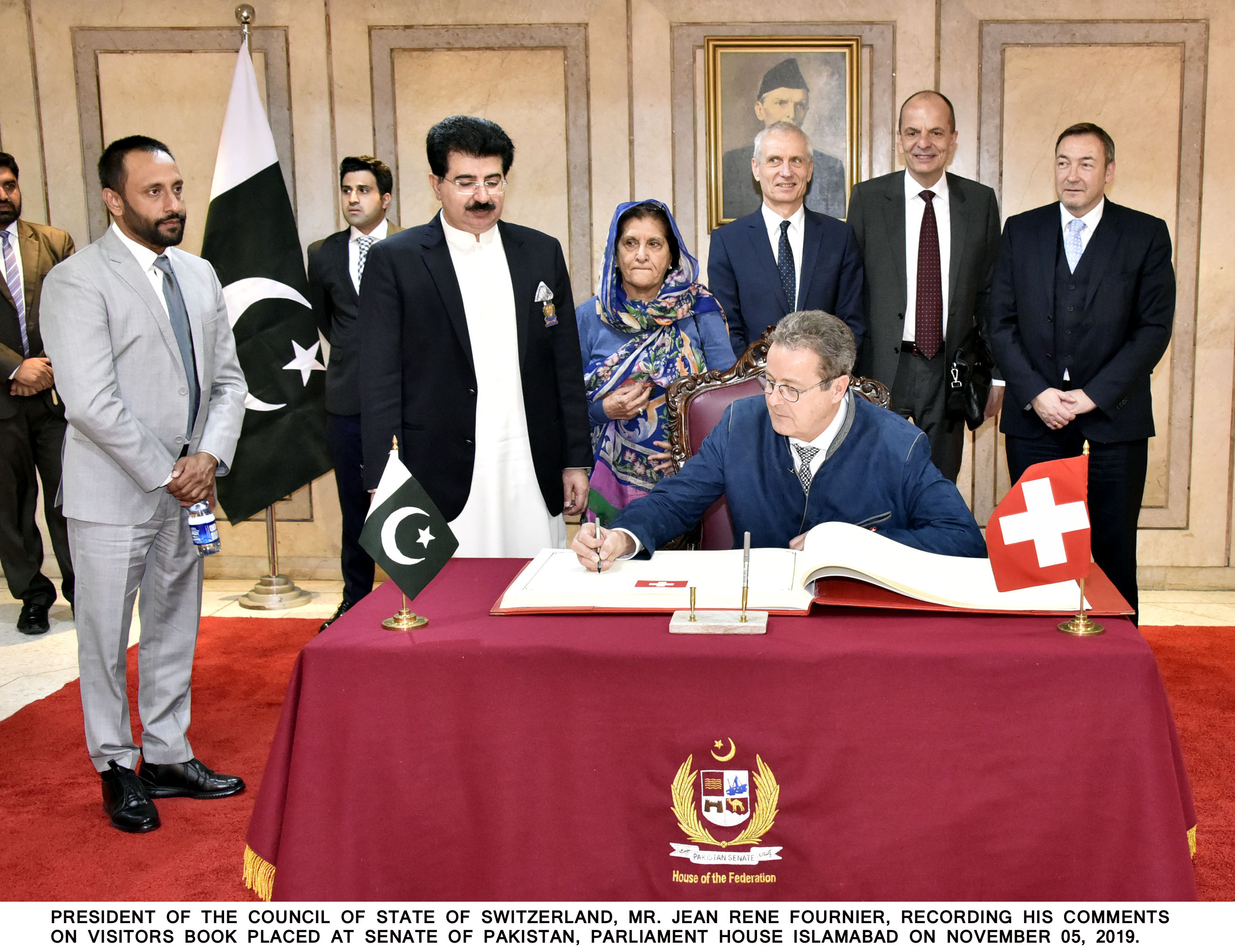 Chairman Senate Muhammad Sadiq Sanjrani said that Pakistan cherishes its bilateral relations with Switzerland and desires to have collaboration in diverse sectors for mutual benefit of the people of two sides.  Chairman Senate expressed these views in a meeting with a Parliamentary delegation from Switzerland.  The delegation is led by President of the Council of States of Switzerland Jean-Rene Fournier here at Parliament House.

The Chairman Senate underscored the need for further broadening the mutual ties and said that the environment in Pakistan conducive for investment and Swiss investors can benefit from various investment opportunities in Pakistan.  Chairman Senate said that Gwadar is becoming hub of trade and economic activities and would promote regional connectivity thus offering huge opportunities for trade and economic growth.  Regarding peace in the region, Sanjrani observed that Pakistan wants peace and stability to make the region flourish.  He said that Pakistan has supported Afghan peace process and would continue to work for durable peace in the region as a peaceful Afghanistan is in the best interest of Pakistan. Senate Chairman also apprised the delegation about the human rights violations committed by Indian Occupying Forces in Indian Held Kashmir.  He said that Pakistan wants solution to the issue as per UN Security Council Resolutions and according to the aspiration of the Kashmiri people.  He called upon the international community and particularly Switzerland to play its role in bringing an end to the atrocities in IHK.

Leader of the delegation agreed with the views of Senate Chairman to enhance institutional collaboration and exchange of parliamentary delegations to further strengthen the bilateral ties.  He expressed his delight to visit Pakistan and hoped that the visit would help in building strong inter parliamentary linkages between the two nations.

The delegation later on held separate meeting with Deputy Chairman Senate Saleem Mandviwalla and exchanged views on matters of mutual interests and bilateral significance.  Mandviwalla termed it a historic day and a new chapter in the bilateral relations of the two countries.  He said that a parliamentary delegation from Switzerland is visiting Pakistan for the first time and we want to broaden the mutual relations in different fields and learn from each other expertise. Both the leaders exchanged views and shared experiences on working and performance of the legislative bodies of their respective countries.  Both sides agreed to activate Parliamentary Friendship Groups in respective parliaments.  Deputy Chairman Senate was flanked by members of the Friendship Group headed by its Convener Farooq H. Naek.  Senator Naek called for close people to people contacts and increased parliamentary collaboration between legislative institutions.