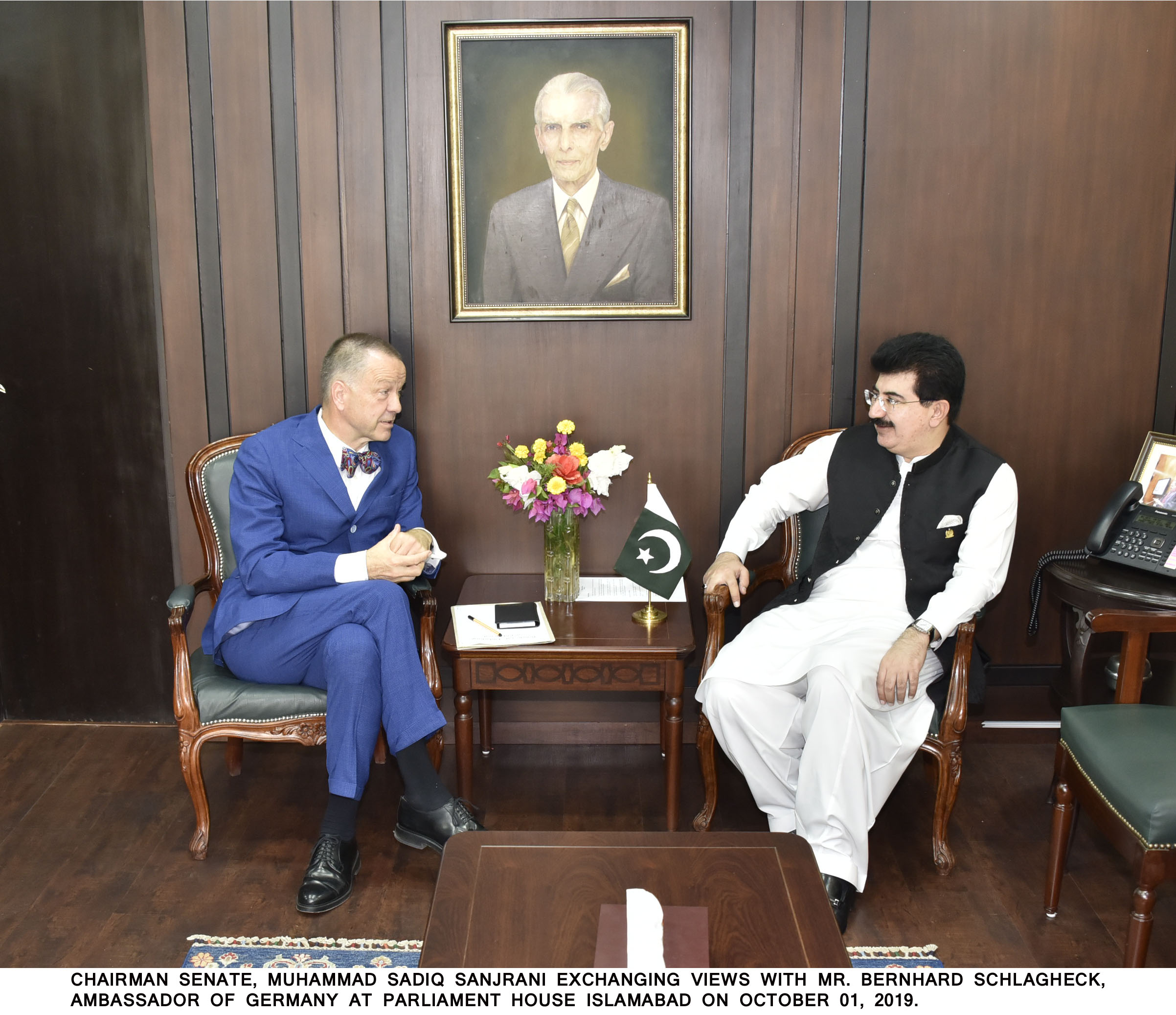 Chairman Senate Muhammad Sadiq Sanjrani has said that Pakistan values its bilateral relations with Germany and desires to further expand mutual collaboration in different sectors to bring people of the two sides closer. He emphasized the need to further strengthen the existing bilateral relations between Pakistan and Germany through enhancing parliamentary ties and cooperation in various areas of mutual interest.  He said this while talking to Bernhard Stephen Schlagheck, Ambassador of Germany in Pakistan here at Parliament House on Tuesday.

Chairman Senate was of the view that parliamentary parleys are highly significant in creating an atmosphere of understanding and therefore the parliamentary friendship groups from both sides need to play an active role for enhancing economic ties. He said that Pakistan desires to expand further the economic and trade relations with Germany and underscored the need to bring the trade bodies and chambers of commerce more close to each other for benefit of the people of both sides as there exists a huge scope for investment in different sectors.

Chairman Senate also informed the Ambassador about the International Parliamentary Congress (IPC) and said that the forum is unique of its kind offering opportunity to individual parliamentarians to work for peace and development. He said that the forum would be independent of any government influence and its headquarter would be based in Senate of Pakistan. He said that institutional collaboration would be helpful in developing local capacities and in this regard Pakistan Institute of Parliamentary Services (PIPS) has initiated a vibrant plan of signing MoUs with different regional and international parliaments to share expertise in legislation and other areas of parliamentary services. He said collaboration between German Parliament and PIPS would be highly appreciated in this regard.

He said that Germany has huge investment in gulf region and investment in Gwadar would provide more feasible environment to the German investors to fully exploit the potential for mutual benefit. He said that Energy and other sectors offer huge opportunities for investment.

The Ambassador said that Pakistan is a great country with hospitable people and lovely culture. He agreed for enhanced bilateral cooperation and interaction at parliamentary and other levels. He said that Pakistan offers a conducive environment for investment and a delegation of German investors would soon visit Pakistan to explore possibilities of investment in different sectors.