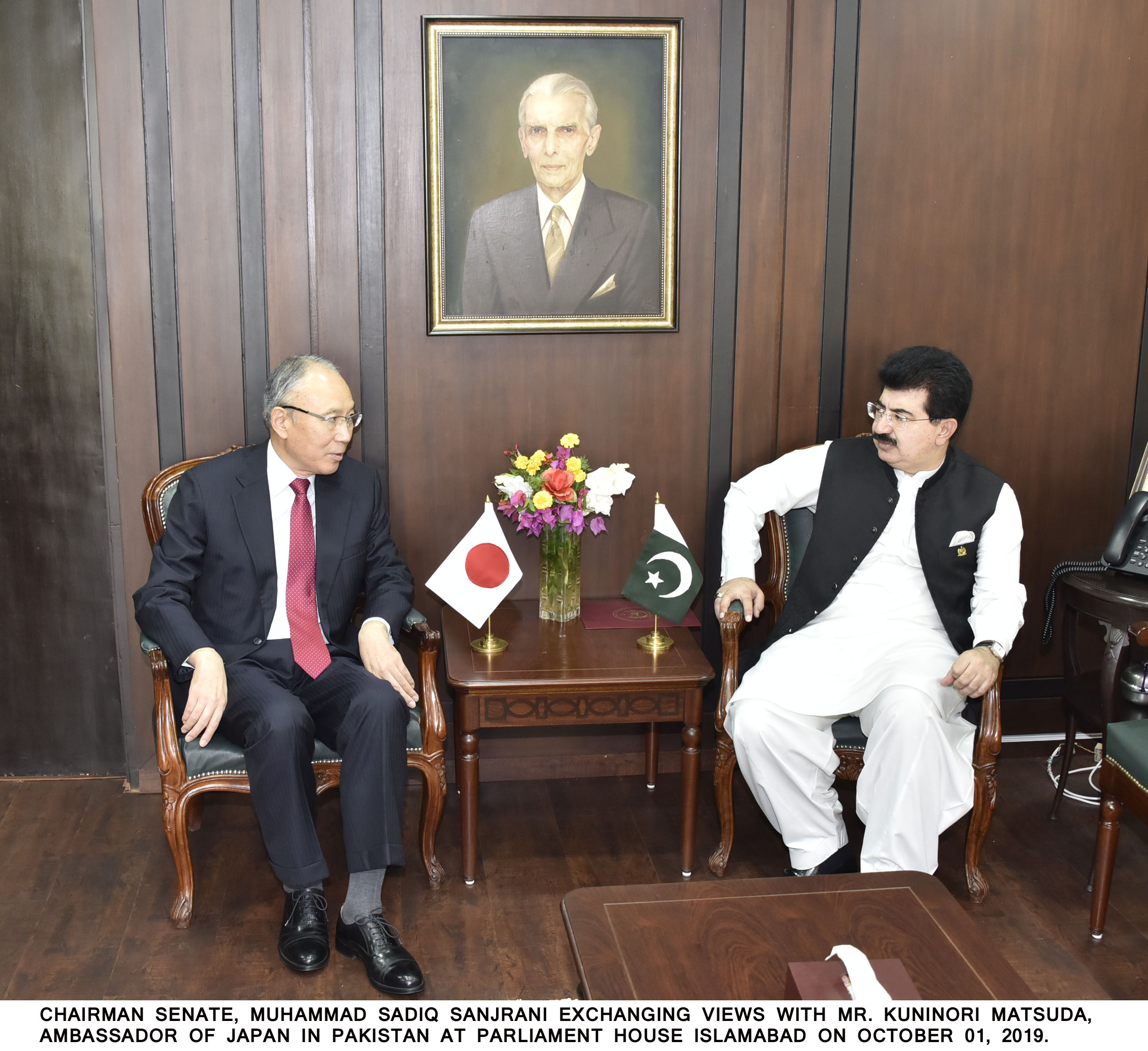 Chairman Senate Muhammad Sadiq Sanjrani has said that Kashmir has become nuclear flashpoint having consequences not only for Pakistan and India but for the whole Asian region. He expressed these views in a meeting with Kuninori Matsdua, Ambassador of Japan in Pakistan who visited Parliament House today. Chairman Senate said that nuclear conflicts have catastrophic effects on human lives, economies, environment and no nation can understand the aftermaths better than Japan.

“Kashmir is an international issue now and needs attention from the global community to avoid humanitarian crisis”, Sanjrani said. He further observed that life is miserable in the occupied valley as Indian armed subjected the people of Indian Occupied Kashmir (IOK) to inhuman treatment. He said that curfew has worsened the situation to the extent that people including women, elderly people and children are facing hardships to get access to hospitals, schools and shortage of food items have created nutritional issues among different age groups. He said that the world community must feel the agony of the suppressed and innocent voices of the people of IOK as UN Security Council resolutions and international law.

Chairman Senate said that Pakistan attaches great importance to its relations with Japan and desires to further expand the friendly ties in different sectors for mutual benefit of the people of two sides.  He reiterated need to further strengthen the existing economic relations between Pakistan and Japan and called for minimizing the imbalance in trade between two countries.  He said that prospects of trade volume can be improved through enhancing parliamentary ties and cooperation.  He said that bilateral relations could be further cemented by increasing parliamentary exchanges.

Chairman Senate said that Pakistan and particularly the province of Baluchistan is blessed with natural resources and minerals. The government, he said, has planned to establish an International standard mineral university in the province of Baluchistan to develop local manpower and impart skills required for different sectors. Pasni has huge potential for fishing industry, however, there is need to properly train the local manpower on modern lines to give boost to the fishing sector. He said that Pakistan would welcome assistance and collaboration in both establishing university and fishing capacity.

He said that both the countries supported each other’s in the hour of need and excellent cooperation has been witnessed at international fora.  He said that there is a need to further build cooperation by promoting people to people contacts and exchange of Parliamentary delegations.  Chairman asked the Ambassador to explore the avenues for investment in Gwader and he would play an active role to help facilitate the Japanese investors through Baluchistan government.

Chairman Senate also briefed the Ambassador about the International Parliamentarian Congress and said that the aim of the forum is bring the parliamentarians from different regions closer and enable them to share ideas and thoughts to work collectively for growth and development of the respective countries as Ambassadors of peace and development.

The Ambassador said that relations between two countries date back to 1952 and since last 65 years, we have promoted and consolidated these relations.    Japanese Ambassador informed that the government of Japan is working on promotion of 14 different areas which would further create jobs for the local population and devising an economic strategic plan to enhance mutual collaboration.