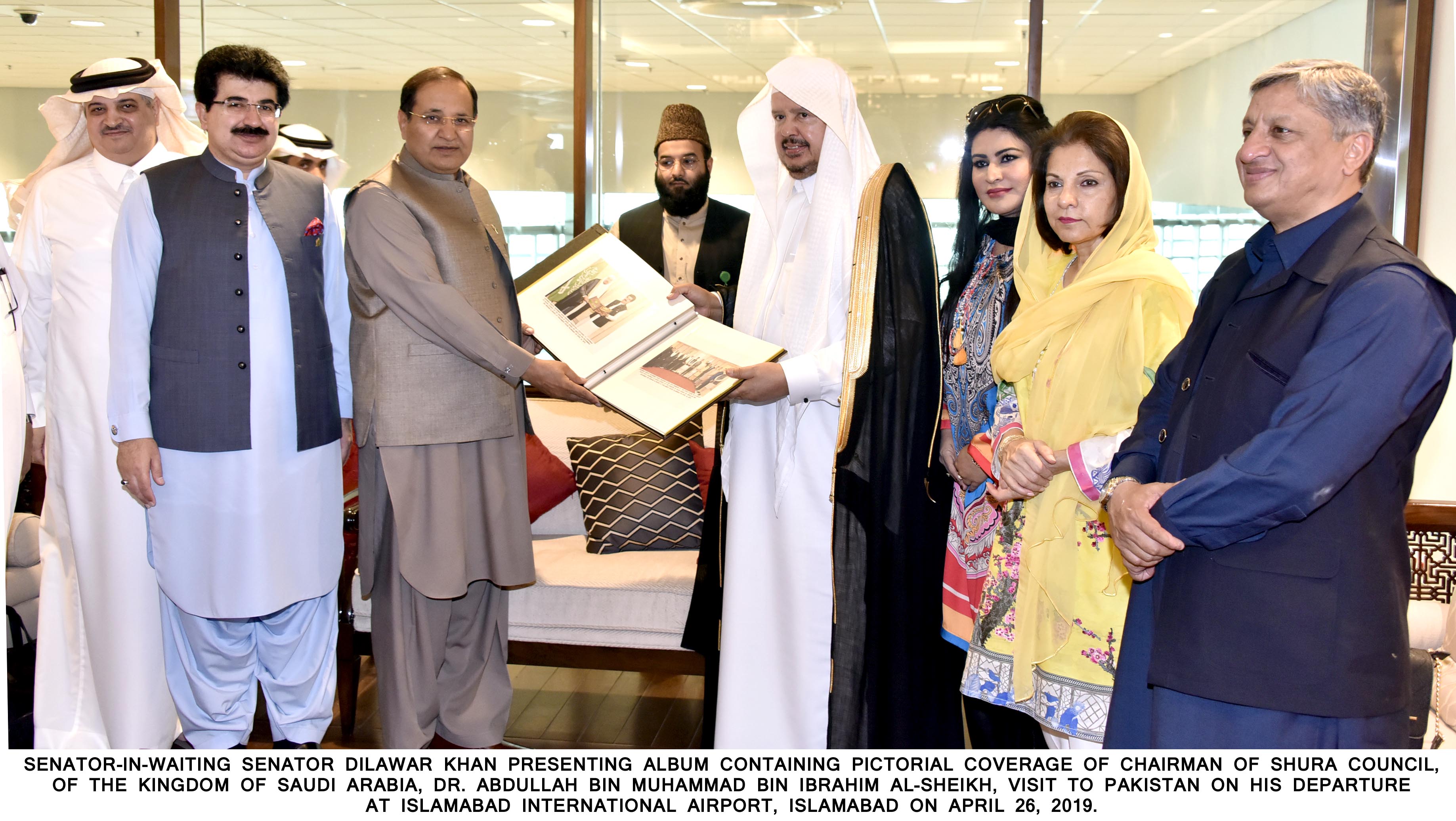 Pakistan and Saudi Arabia have agreed to further boost the economic cooperation and institutional linkages for pursuing a common agenda for regional development and sustainable peace.Both the sides have further committed to focus on promoting trade and investment ties while working for the welfare of the people.This resolve was voiced on the conclusion of the three day visit of high Saudi delegation led by Chairman of the Shura Council Dr. Abdullah Bin Muhammad Bin Ibrahim Al-Shaikh to Pakistan on Friday.

Chairman Senate Muhammad Sadiq Sanjrani see off the delegation on the New Islamabad International Airport on Friday.  He was accompanied by the Senators Dilawar Khan, Dr. Asad Ashraf, Mir Kabeer Ahmad Muhammad Shahi, Sassui Palijo, Seemee Ezdi and senior officers of the Senate Secretariat.  While talking to the Saudi delegation, Chairman Senate Muhammad Sadiq Sanjrani said that this visit has paved the way for enhancing the existing economic, social and political ties.  The exchange of frequent visits would further boost cooperation and strengthen the bilateral ties.  He said that fruitful discussion with the Chairman Shura Council and members of his delegation have given a chance to explore the avenues for adopting a common approach towards future interaction.  He said that the keen interest of the Saudi delegation for seeking investment opportunities in Pakistan particularly their intent to benefit from the economic prospects offered by the game changer CPEC Project is not only beneficial for both the countries but also for development and prosperity of the region.

He said that both the sides have had an opportunity to learn from each other experiences.  He reiterated that the cooperation between Senate of Pakistan and Shura Council of Saudi Arabia would further deepen the historic relations and would suggest a way forward for trade and economic ties.  He said that both the countries are willing to further cooperate on international fora and the support of Saudi Arabia would be a great source of strength to Pakistan while assuming the Presidency of Asian Parliamentary Assembly for the next tenure.  He appreciated the cooperation and support offered by the Chairman Saudi Shura Council for cementing the institutional linkages.

The Chairman of the Shura Council on this occasion said that his delegation have had fruitful deliberation with the leadership of Pakistan and hoped that the existing relations between the two countries would take a new turn for unprecedented cooperation in economic and trade sectors.