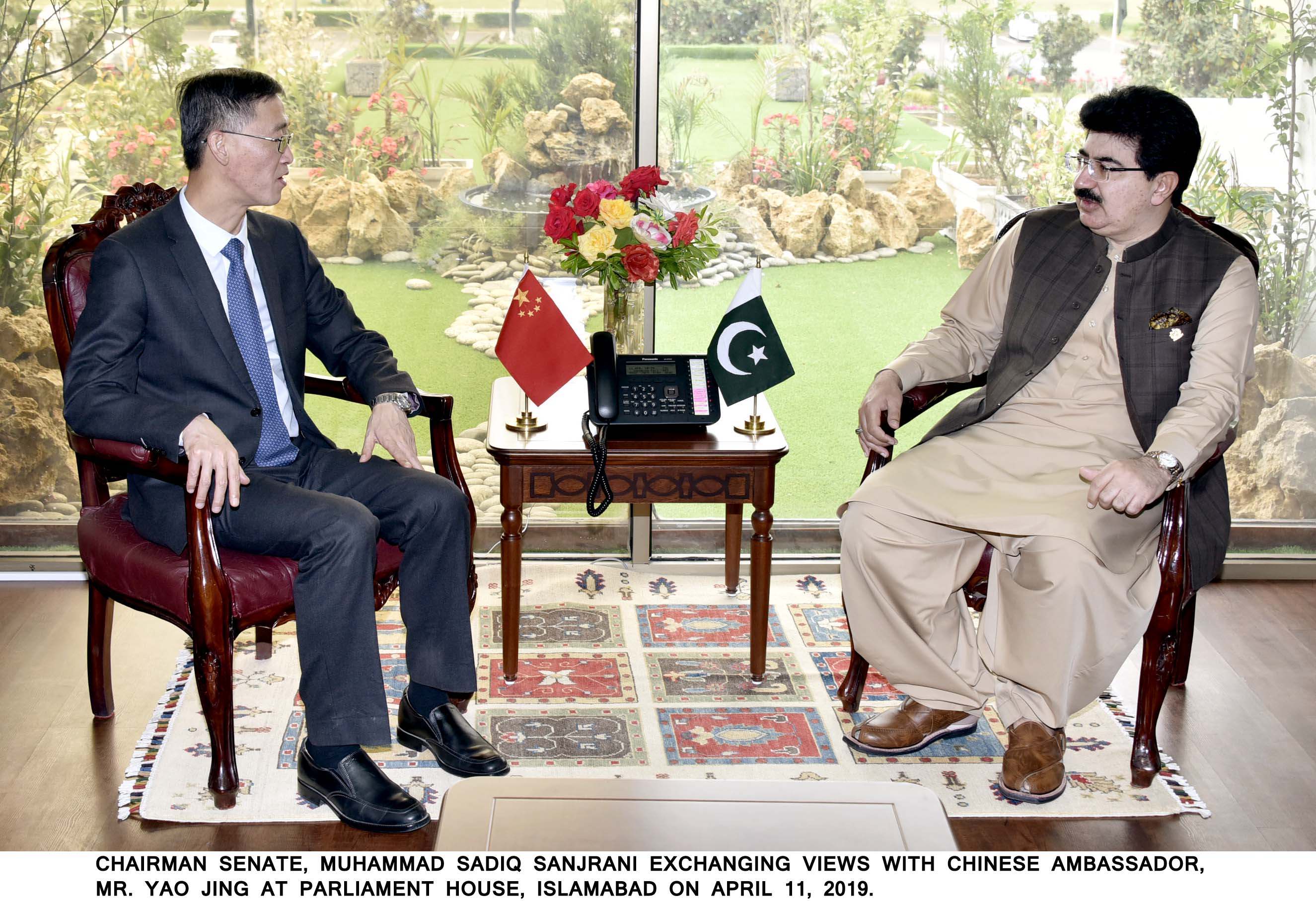 Enhanced Parliamentary linkages between Pakistan and China would further cement the friendly ties of the two countries.  The increase in reciprocal visits of the parliamentary delegations would also strengthen the existing political and economic relations, while setting the stage for future interaction in different sectors.   A high level parliamentary delegation led by Deputy Chairman Senate will be visiting China very soon on the invitation of Chinese Political Consultative Conference (CPPCC).  An invitation to the Chairman of the National People Congress (NPC) of China to visit Pakistan has also been extended.  Chairman Senate Muhammad Sadiq Sanjrani said this while talking to Ambassador of China Yao Jing, here on Thursday.

Chairman Senate said that historic friendly ties between Pakistan and China have further strengthened due to enhanced economic cooperation between the two countries.  Projects under CPEC are not only for the benefit of people of Balochistan but also very important for economic development of different areas of the country as well as providing a mile stone for future development of China.  Different mega projects being executed under China Pakistan Economic Corridor (CPEC) should be expedited so as the people can reap the fruits of the development at the earliest.

Chairman Senate said that inauguration of Gwadar International Airport would help project Gwadar as economic hub of the region and would pave the way for beginning of a new era of economic prosperity.  He said that the development of the region is connected with expeditious completion of the projects being executed under CPEC.  He said that both the countries are committed for provision of maximum fruits of development to the people by timely completion of the projects.  He said that Pakistan and China are actively engaged to successfully implement the agenda of poverty alleviation, fighting corruption, overcoming the energy crises and improving the agriculture development.  He said that China has always supported Pakistan in its bid to strengthen its economy and CPEC is an obvious example of such support.  He said that Pakistan and China have cordial relations at all levels from Parliaments and governments to the level of the people at large.

Chinese Ambassador on this occasion said that Pakistan and China friendship is time tested and the present economic partnership would be mutually beneficial for both the countries.  Pakistan and China are actively working on common agenda of regional development.  He said that Chinese government is fully cooperating with government of Pakistan for the executing public welfare projects in less developed areas of the country with the active participation of the relevant provinces.